Grenfell Tower One Year On: the black and sodium hours 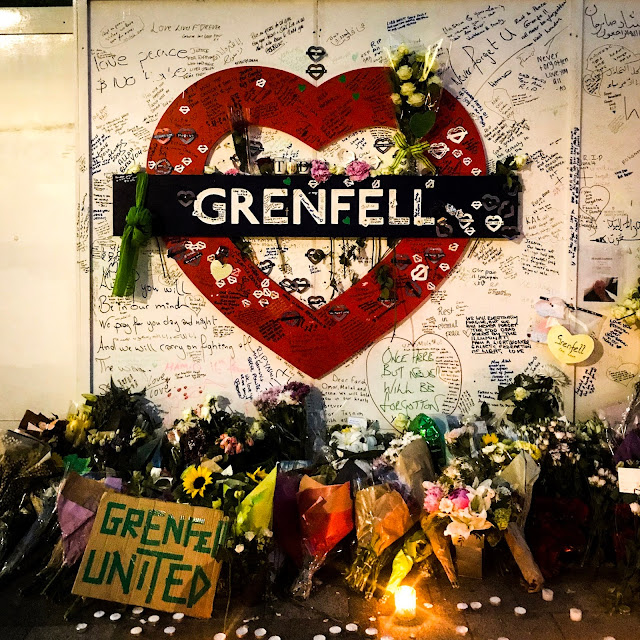 But through the lost,
the black and sodium hours
of the night,
cries for help,
desperate supplications shot skyward
into the never-silent hum of
the North Kensington sky, and


In the early hours of June 14th 2017, a devastating fire broke out in Grenfell Tower, North Kensington. The final death toll was set at 72. From the early hours immediately after the fire into the following days and nights, it was the local residents and community groups who coordinated the relief effort; ordinary people responding in an extraordinary way.

That day at work, I will never forget the sense of relief at seeing all of my students sat there in front of me, some of whom I knew to live in the immediate vicinity of Grenfell Tower.

As I walked the streets of Ladbroke Grove with good friends around 11pm, later that same day, feeling helpless, all I saw around me was the best of humanity. At Acklam Village, I met former students I had taught many years before, now grown men, sorting supplies into the small hours; women who'd been there all day without a break sifting through thousands of donations; men still carrying loaded boxes in and out, filled to the brim with further supplies.

Small community centres like Al-Hasaniya Moroccan Women's Centre, larger venues like Acklam Village, and the largest of religious centres like the Al Manaar Mosque, played their individual parts, all demonstrating what true community spirit was.

A year later, many families are still in temporary accommodation, some are still in hotels, an inquest into the causes of the fire has begun and the Prime Minister has recently expressed her 'regret' for her part in the handling of the immediate aftermath.

This tragedy will profoundly affect the victims' families, the survivors and the North Kensington community forever. In the wider West London community, the Grenfell Tower tragedy will stay forever etched onto our collective consciences.

This poem above was written the day after the fire and is just a raw recollection of my thoughts at the time. I know it's not much, but I dedicate it to the victims and their families, the survivors and those struggling to come to terms with everything, and to those community workers who still tirelessly do everything they can for the area and community they love.