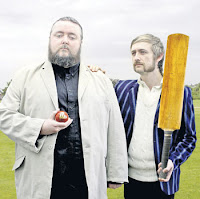 Every summer holiday needs its soundtrack and this summer, for me, was absolutely no exception. Things are looking up in my world: I have a lovely girlfriend, I joined a cricket team and my current place of work is ten times better than my last.
This summer, was an Ashes summer. As I write this the England team are preparing to continue playing against Australia in a series of ODIs, following the successful reclamation of the Ashes Urn. So, right on cue, an Irish band, The Duckworth Lewis Method, release their eponymous album - a concept Album based around cricket. The Duckworth Lewis Method are, in fact, Neil Hannon of The Divine Comedy and Thomas Walsh of Pugwash.
The album successfully uses the game I love and stories pertaining to it from over the years in order to craft a selection of perfect pop songs. Many of the songs with their hit of history and twist of humour jump along to very Beatlesque melodies and beats.
Particular highlights of the album include "Meeting Mr Miandad" (a irritatingly catchy number with a suitably catchy chorus), "Nightwatchman" (a songs about the pressures of guarding your best batsman towards the end of the days play) and "Mason on the Boundary" (a romantic image of village cricket that includes a monologue from IT Crowd's Matt Berry).
Perhaps to highlight these three songs is to do the rest of the album an injustice. It is, in many respects, the perfect pop record.