The First Taste of Victory 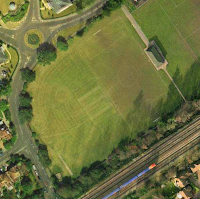 Swinging Googlies (165 all out) beat The British Library (164 for 7) by 1 run.
Victoria Recreation Ground, Surbiton.
After a run of defeats and a tie, the Swinging Googlies have finally won their first game of the season.
Rob Punter (34) and Andy Fairburn (27) were the men sent out to open and started notching up the runs pretty sharpish. Fairburn is beginning to look more and more like a demon with bat and ball, both in the nets and on the field of play. This was, according to all records, the highest opening partnership in Googlies history.
Lawrie Homan came in and put 72 on the board in no time at all. Mike Abel (5) was looking comfortable - that is before I gave him out LBW. Sean O'Connell (8), Steve Fenwick (0), Dave Le Vay (7), Myself (0) and Joe Abel (0). All in all, with 165 as the team's total, things looked comfortable - it is thought that 165 is the highest ever total set by the Googlies in their history.
After the tea break, and in spite of some sharp fielding, the Googlies had a bit of a wobble and the British Library's veterans were both exceptionally stoic and resiliant with the bat - the older members of their team being particularly gracefully with their shots, if somewhat overly defensive.
Breakthroughs were happening and wickets being picked up here and there by the likes of Homan, Fenwick and J. Abel. On the whole, the fielding was looking sharp at the outset, O'Connell and Fenwick taking good catches, but the British Library seemed particularly adept at grabbing singles and doubles.
Ron Googly, the Swinging Googlies official reporter, commented:

But the thought of being defeated by one’s own tea was simply too much to contemplate and with some strict marshalling from Rob and gentle banter from Tommo, the fielders gradually started to turn it round. Steve got third time lucky and made up for putting a couple down and Dave L threw himself around with abandon, again going for grass stain of the week award. Tommo laid down some stylish moves and indeed it was good to see sexy cricket back on the field of play.

I must admit that it was good to see that my 'gentle banter' - which included winding-up one batsman about the cleanliness of his cricket gear - was acknowledged and the use of an expression I coined, 'sexy cricket', also getting a mention.
After coming down to the last ball of the last over, and the British Library needing three from it for the win, some sharp fielding ensured that they scored only a single. Victory was secured.