February 17, 2005
Mark Prendergast is possibly the most annoying person imaginable when it comes to playing golf. Why is it that someone with so little belief in his own sporting ability somehow manages to pull off the most dramatic golfing upset so far. The last time we played at the Cambridge Lakes he had pushed both myself and Jonesy for the first half of the course before trailing off when coming into contact with lakes and their inhabitants.

My luck was out this time though. After the pair of us drawing the first hole with 'double-bogies' he set about scoring some good holes when I only could manage putting my ball into the hedges. Luckily for me I managed to stabilise my scoring when once more Prendy's game wobbled a little around the lakes. Luckily the ducks and coots weren't anywhere nearby when he pumped two drives into the water. On the ninth my moment of triumph came when I finally scored a 'bogey' when Prendy could only manage a 'triple-bogey'.

In the end he still won. My small moment of glory, in a game which was possible one of my worst ever, proved too little, far too late. For the benefit of Mr Jones, who couldn't be present but was sorely missed, above is the scorecard. Damn you Prendergast. 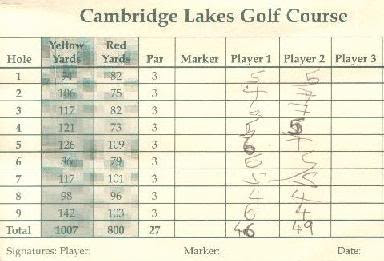