Appointment With Death by Agatha Christie 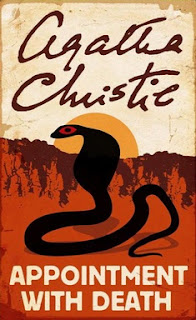 As a child I was brought up on a cocktail of television adaptations of Agatha Christie’s work. It is only in my adult life that I have realised just how prolific a writer she really was. My favourite of all her characters was undoubtedly the Belgian detective, Hercule Poirot. This, combined with my love of Middle Eastern culture, led to choosing Appointment With Death as my first ever Christie novel.

Appointment With Death was published in 1938 and is based in Jerusalem and Petra. It follows the fortunes of a satisfyingly diverse range of characters: the Boynton family and their domineering matriarch; an old friend of the Boynton family; a young female doctor; an internationally renowned psychologist; and a couple of well-to-do English ladies.

We see remarkably little of Poirot at first in this novel, with the exception being when he overhears the words, “you do see, don’t you, she’s got to be killed?” through the walls of his hotel room. To many, this could be throwaway statement, to Hercule Poirot, even when he’s on a holiday, the alarm bells ring.

As the action moves from the hotel in Jerusalem to a camp at Petra, so to does the cast of characters, whose lives seem to be becoming increasingly intertwined. It is here that the elder Mrs Boynton meets her demise.

Christie weaves a plot that results in everyone, from family members, through to the servants on the camp in Petra, all being implicated in the murder of the Mrs Boynton.

The local British Administrator – the region was known as the British Mandate for Palestine at the time – calls upon Hercule Poirot to assist, not in finding a case to bring to court, but simply to find out the truth. This Poirot does impeccably, in his own distinct style, and needless to say the culprit is not who I expected them to be.

Agatha Christie, having travelled to the Middle East along with her husband in the 1930s, seems to have used all of her skills in not just creating a great storyline, but also in embedding this within the setting of British Palestine. You feel at once that you are reading a splendid novel, whilst learning about a very specific time period.