A Single Man by Christopher Isherwood 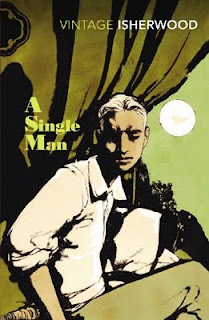 Never one to do things in the most logical of orders, I watched the film version of A Single Man, starring Colin Firth as the main protagonist, before I had read the novella. In fact I had no clue about the existence of Christopher Isherwood prior to watching the film. The film was a fantastic piece of cinema so I decided to investigate the novel behind it.
A Single Man is the story of one day in the life of George, a gay Englishman working as a professor in a Los Angeles college. The narrative focuses an intense light on George's movements and actions from the moment he wakes until the end of the day - maybe that should say the end of his days.
George is living in a neighbourhood that was once bohemian, but has been slowly populated by homogenous, Stepford-esque suburbanites. They all aspire to have clean lives free from anything 'queer' infringing upon it. To this extent George exists very much on the periphery of this way of life with the character of Mrs Strunk as good as saying you're a nice guy, but we can't let you meet our friends because you're gay.
Along the way a small cast of characters transect George's day, and most importantly Charlotte and Kenny. Charlotte is an old friend of George's and is desperately lonely having been left by her husband and her son. Kenny is one of George's students who seems to harbour feelings towards George, but never openly expresses it.
All of the events work to highlight one thing, that George feels separate from this constantly-looking-over-your-shoulder, Cold War world, not least as a result of losing his life partner Jim. Strangely, his interactions with Kenny in the evening seem to reconcile George with the world, but his ephinany is never realised.
Thankfully the characters are not as sanitisied as the characters in the Hollywood version of the story. George is not as anally-retentive as Firth's portrayal, Charlotte not as a outwardly glamourous and Kenny is not as stereotypically college-boy American.
Ultimately, this is the sad story of a lonely man, but it is also a great critique on the homogenisation of every day life and culture in Southern California in 1962. There is an ever present tone of cynicism in the voice of George, that although clichéd now, marks the novel as very much of its time.
It seems simplistic to see this novel as a incitement to react against the oppressive force of passing time, yet I struggle to express a simplified idea of the novel's meaning. Any help would be gratefully received.