The Right Kind of Aid? 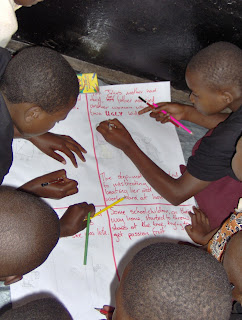 Having been involved in a partnership between the college in London at which I work and a high school in Kabale, Uganda, for nearly three years now, I am beginning to think about whether there is such a thing as a ‘right kind of aid’.
Our partnership, created in many respects by the now-trustees of Solomon’s Children, a UK-based and registered charity, focussed originally on the diversification of teaching and learning techniques in the Ugandan high school. It would see the teachers from our college teaching in the Ugandan classrooms to showcase different lesson types that avoided the hitherto ubiquitous ‘chalk and talk’ lessons – lessons where the teacher stands at the blackboard and the students write it all down which isn’t great for the quieter students.
In the UK, all teachers are entitled to over thirty hours of CPD, or continuing professional development, on an annual basis, paid for by the college or school. Our Ugandan counterparts, I discovered, did not have this privilege.
So was our taking the lead in training at the school, in place of the government, a positive thing – was this the ‘right kind of aid’?
On the face of it, of course it is. There is something that the teachers need – CPD – being provided, free of charge, by people who are willing to travel thousands of miles, at their own expense, to assist. The UK and Ugandan teachers enjoyed the sense that they were mutually valued and were part of a global community of teachers, rather than an isolated group of teachers from small districts of small countries. The students enjoyed the introduction of group work, field trips, outdoor classes and, in my case, the creative writing lessons – this in addition the students from the UK college participating in the lessons too.
Of course, there are counter arguments. The teaching and learning styles that teachers in the UK, the beneficiaries of a continuous stream of training, bring to the table in Uganda are obviously very Anglo-centric – that is they reflect the English way of educating and reflect, therefore a ‘foreign’ approach. Some people could, and indeed some of my colleagues do so, consider this to be a form of cultural imperialism or, more simply, colonialism all over again.


As the years have progressed, the projects that we are partnered with has expanded to include a street education centre called Restore Lost Hope, the Kabale Arts Centre hosted at the Edirisa and on-going work in refurbishing the Wisdom Day Nursery.
The work at the high school has also evolved to be more about the sharing of good practise, rather than the dictating of it from UK-based teachers, with the onus being put on the Ugandan teachers to arrange their own staff training day. Last year, the result was a great success with the Ugandan teachers taking genuine pride in being able to show their UK counterparts what they were capable of – in nearly all respects their efforts put many UK training days I have attended in the shade.
The partnership is evolving, with the Ugandan teachers taking more of a lead and the UK-teachers merely acting as a point of reference, if needed prior to any training event. So, does this represent how, given time, small scale projects such as this can become the ‘right sort of aid,’ or does our mere involvement with this high school, however indirect, represent cultural imperialism in all its ugliness?
This post was first published on 28th January 2011 on Africa on the Blog.