A Grain of Wheat by Ngũgĩ wa Thiong'o 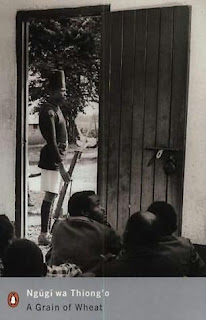 My desire to read something by Ngugi wa Thiong'o stems from a couple of different things. On the one hand my involvement with developmental and cultural exchange projects in East Africa meant that it was about time I read a work by an East African author. The second reason was curiosity aroused by the author's name which, to this day, I am still slightly unsure of how to pronounce.
That aside, this book does not disappoint. In a manner that is typical of postcolonial literature, the richness of the language use and narrative style surpasses a large number of texts written by English authors of a similar period.
The story that Thiong'o creates feels epic. The weight of the book's content and the intertwining of its characters' tales, as the small Kenyan town of Thabai prepares for Uhuru - Swahili for 'freedom' - from the British Empire, almost seems too much to take in.
We follow the story of a seemingly simple man, Mugo, who is revered by all of the villlage folk and people of the surrounding hills as being a hero of the fight against white rule. What Thiong'o does so subtly is to show that independence was not something that was gained easily and was not a battle fought in rose-tinted, cinematic slow-motion as heroes fought their oppressors.
This village in pre- and post-Independence Kenya is, instead, filled with flawed heroes and Mugo is just one of them.
This book is not only a great example of African literature, but one that shows the reality of any situation  in the world where people suffer from oppression, suppression or colonial rule. It demonstrates how, more often than not, humans seek to serve themselves first and choose to keep their heads below the parapet, regardless of the universal needs of the many.