The Viceroy of Ouidah by Bruce Chatwin 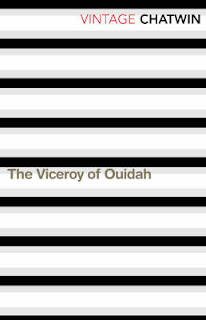 When you pick up this book it is hard to believe that such a thin text will, simply speaking, have such a gripping storyline full of genuine intrigue for the reader. In a mere 100 pages the novel goes full circle in a space of time that some novels take just to get going.
The story centres around Francisco Manuel da Silva, a Brazilian, who, after having come from relative poverty in his native land, finds wealth in the Kingdom of Dahomey - modern day Bénin - as a slaver.
The story is not a straightforward rags-to-riches tale, instead it highlights the ugliness of the protagonist's character and trade as he goes about befriending the eccentric King of Dahomey, before things begin to fall apart for him.
By the end of the text you are left unsure as to whether one should feel pity or feel relieved that da Silva's sordid existence has come to an end.
Some might argue that the novel does not do enough to highlight the dark manner in which da Silva makes his fortune, but I think the subtlety of Chatwin's narrative does enough to infer that this character is morally and emotionally jaded by his actions in life and his experiences.