Down and Out at the Victoria and Albert Pub 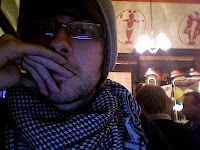 Station concourses are, to my generation of semi-nomadic Londoners, an integral part of the fabric of life. We don’t necessarily have cars in London, we have family outside of London and we still pop home regularly to see our mates and families – again, outside of London. We also most likely live in shared houses, listen to iPods and drink and have sex too much.

We are at an inter-stage between actually having settled into an ‘adult life’ and lingering in a ‘student life’. I can check one thing off the list – having found the ideal woman – but the house and car will have to wait.

Back to the station concourses: I seem to spend half of my life on them. When caught at a station with time to waste and a few quid in the pocket one tends to gravitate towards a bar. I have done this now – as I write I am sat in the majestically named Victoria and Albert at Marylebone Station.

In spite of the fact that this place should be alive with tales of travelling bounding from wall to wall and should have a friendly and jovial host stood pulling pints behind the bar regaling all-comers with anecdotes of his own, it quite simply falls short on both counts.

The barstaff all wear name badges – always a bad sign. One of these barmen doesn’t even yet warrant the right to have a name; he is simply christened ‘Trainee’. The area around the bar is full, but rather than customers seeming relieved to be welcoming in the weekend, it instead resembles the trading floor of the New York commodity exchange.

Unscrupulous ‘banker-types’ wrestle each other to see who can thrust their money the most firmly into the face of good old Trainee who, invariably, gets it wrong and serves the most recent arrival to the hoard incompetently. When, finally, the money reaches the till you are more likely to be greeted with a grunt than a ‘thank you’.

It is this type of personality-void pub that will start to tar all other bars with a bad reputation. Pubs with personality exist in forgotten quarters the whole of London over, yet, to a nomad like me, I seldom get the chance to investigate such places and have to settle for a grunting scrum of relics from the stone age.

On a marginally different tack, one can’t help but feel sad about the fact that, in the right hands, such a pub could be filled with character and not just in the form of A2-sized photocopies of black and white pictures of Great Central steam locomotives, but with a tangible soul that welcomes travellers.

Lets hope that the lasting impression of the Great British pub, for those who pass through the doors of the Victoria and Albert, is not of this.