September 07, 2009
Tonight has been a most joyous of occasions. After the afternoons CPD activites at Kigezi Highs School, we arrived at the Kabale Municipal Stadium to watch the Kigezi boys take on Bunyonyi Vocational College in the final of the district football tournament.
The team had qualified for the final earlier in the day and, as a result, word had gotten around the Kigezi boarders and thus a crowd had of around 2,000 had amassed. 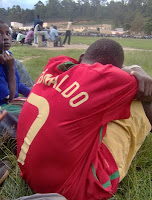 The atmosphere was heightened by the arrival of the mzungus. Having been spotted, Liz Walton was called upon by the student with the megaphone to say a few words. She said "hello". The crowd went wild.
When the first goal was scored, midway through the second half, the crowd got even livelier. Finally, when a second went in and, ten minutes later, the final whistle went, the whole stadium was sent into a frenzy.
The trophy was lifted, and a lap of honour commenced before the players, chased by a crowed of near to 500, ran our onto the main street of Kabale celebrating... still with the trophy held aloft.
With some students on the bus with us, getting out of the vicinity of the stadium because some people were getting a bit wild, we proceeded up the main street. On board many songs were chanted, much to the admiration of the students and civilians on the street and, more importantly, to the mass of boarders that had congregated at the foot of the hill to Kigezi High School.
Upon first sight of the bus, and hearing the songs we were singing, the students came running across the fields, surrounding the bus entirely and cheering.
The atmosphere of love and joy was truly moving. This is a scene that one usually only sees on TV; I was living it.