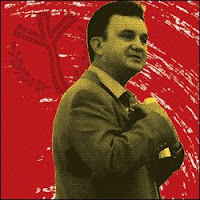 Occasionally, when getting on the tube at Wimbledon, I like to vary my early morning reading by picking up a copy of City AM or The South African - both of which are relatively well-written papers, especially when compared to the likes of the Metro.

Today, when I picked up my copy of The South African, I was stunned to see the headline 'UK Saffers Flocking to the BNP?'

The use of the question mark in the headline perhaps indicates that the publication is itself unsure of whether or not this is true, so what is it based around? The article seems based around the Cape Times' assumption that voting the British National Party, a "far-right party", would better "suit [South African ex-pats'] traditional South African values".

The South African goes on to quote from anti-fascist magazine Searchlight, saying that many with a history of hate crimes in South African have joined or contributed to the BNP. Included amongst these is "Arthur Kemp (pictured), a Holocaust denier linked to the murder of ANC [African National Congress - a predominantly black party] leader in 1993, is the most prominent African in the BNP's ranks". Kemp is then alleged to be "running the party's website and [was] spotted last week handling their campaign leaflets" for the upcoming elections for the EU Parliament.

The first thing that gets one's attention here is the irony of the situation. Is the BNP, a party that claims "immigation is not working" seriously using immigrant workers to do its dirty work? This seems a strange development, but it is not unlike the BNP to show inconsistency in its attempt to win votes at the ballot box. It is perhaps testament to the average IQ of their supporters that such an inconsistency in their policy goes unnoticed.

Secondly, this article intimates that, Post-Apartheid, there are still people out there that hold and support the kind racist views that destroyed South Africa's reputation in the first place. I sincerely hope that fools like Kemp are not endemic of modern day white South Africans living in the UK.

I hold great hopes for South Africa, but have some severe reservations about the political culture there. They are, like Zimbabwe, in need of unity in the government, not a collection of dissonant voices echoing through from the past. I am not convinced that Jacob Zuma's 'coronation' as President will help this, especially as he stands idly by as squabbles with the Democratic Alliance rumble on, thus alienating the white voters more so.