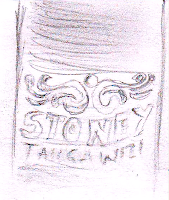 I feel already as though I have been here for a week. I have perhaps experienced deepest Africa more so today than before. After leaving Entebbe Backpackers we made for the Equator via the outskirts of the capital Kampala.

Kampala is extremely dense when compared, like-for-like, with Entebbe. It seems that no one in Kampala is idle. Everyone moves with purpose. The air is thick with the fumes of mopeds (boda-bodas), the dust from the rapidly drying ground, the dying exhalation of diesel exhausts and, somewhat thankfully, the scent of barbecuing food.

As you pass through Kampala you feel like a very white (mzungu) fish in a very tropical fish shop. This continues as the bus winds its way through the suburbs, still just as industrious, but distinctly less smoggy.

At the Equator, enterprising souls have set up craft shops and attempt, using broad smiles and bucket loads of African charm, to sell you there traditional wares; these range from the ubiquitous hand-carved elephants to hand painted pictures/canvasses going for USh 750,000. Poor old Rebecca nearly keeled over when the happy saleswoman broke the news to her! Poor Cherub.

Anyway, I spent no money this time, but made a solemn promise to one retailer that I would "return to him" - to prove this, I shook his hand and took a picture of him, in front of his shop, by which I could remember him. Excessive I know, but he had a charm to him. Another stall was being run by a girl, who I wouldn't have thought a day over fifteen, that had her five month old baby lying upon a blanket, on the floor, under a shelf. At this point I told her all about Cianan, my nephew.

My writing has currently become quite broken; I have been joined by the fabulous Francessca, rowdy Ruby and amazing Anthony.

Our journey continued on through countless townships and villages inhabited by poor, but happy, harmonious people. Children playing with and selling fruit - would you believe it, USh 4,000 for fifty bananas?  The adults all seem so industrious; everyone has their own business it seems. It makes me angry that in the UK so many poor people just wallow in their own self-pity, as opposed to fighting for survival.

This country is beautiful. I have been meaning to mention it for a while, but, the instant I set eyes upon Uganda, I fell in love. I have already resolved, by hook or by crook, that I shall return.

As our journey continued, stopping in Mbarara briefly, I continued to observe the people - the women with the most beautiful of postures, bent-double, everywhere tending to the land, children tied to their backs, all in the searing heat. The females appear to be the labourers here; men are for 'trades'.

For the final leg of the journey I was sat next to Teequay. She is a girl with a 'head on her shoulders'. We discussed a number of divergent topics. Our conversation lasted until sunset and, as darkness and heavy rain descended, we made Green Hills Hotel, Kabale.