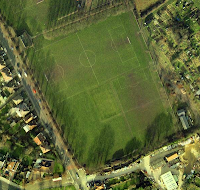 The Golden Age 170 for 8 beat Swinging Googlies C.C. 108 for 8, by 62 runs.
So this was my first match as a Swinging Googly. For all intents and purposes the match was a personal success, although as a collective we probably weren't as successful.
We went out to field first and our bowlers put up a good showing with, to the best of my memory, Ant, James, Ben and Dave all getting wickets. There was some clean catching from James in the field too and some interesting juggling-cum-catching from Andy.
Our big problem came as the Golden Age's middle order came into bat. One of their guys was stubborn as hell and just couldn't be removed from the crease; the other decided to smack the ball all around the Alexandra Rec - scoring two sixes in the process.
In bat we were slow. We found it hard to crank the pace of the scoring up to the level of our opponents, especially after the dent their middle had left in the scorecard.
Matters weren't helped when James hooked a beautiful shot to the boundary for four, but twisted his knee in the process, and Ben took a ball straight to the eye - both had to retire hurt and were taken to hospital.
So to me, at number 11 in the order, I didn't really expect to get a bat, but, sure enough, after the two retirements I found myself in to bat out our remaining overs. I survived well, actually selecting my shots before playing them and scored 3. On the very last ball of the innings, Chris attempted a big shot to be bowled out, thus I was the last man standing.
First innings; 3 not out.