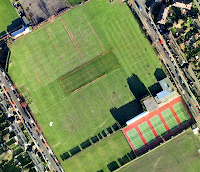 Winter nets? What are they? All this talk of nets has got some members of the family wondering just what the hell I am up to!
In response to my Facebook status saying 'Tomás was on fire in the nets tonight', the response from one bemused friend was 'you really need to give up those tights boy!'
Just to clarify then, winter nets is the name given to practicing batting and bowling for cricket, prior to the start of the actual playing season - the idea being that you can practice inside in the relative warmth of a sports hall, instead of in a dark, boggy field.
So, having found a 'mediocre social cricket team' to play for on Gumtree.com, called Swinging Googlies Cricket Club, I am getting into this whole winter nets thing. So far, since mid-february, there have been two sessions, with a third happening tonight
Wednesday February 18th was the first net session of the new year. It provided an opportunity to get to meet the rest of the team - a load of Mikes, Steves and Daves. Regardless of all having confusingly similar 'bloke-ish'  names, they are a great bunch of people.
My nerves, I must admit, were jangling as I stepped up to bowl my first delivery. I haven't been able to bowl straight on a full-length pitch for about 7 months and my initial instinct was to declare to the rest of the team how bad I am... and surprise, the jinx that had befallen my bowling suddenly lifted. Granted, it wasn't the fastest or most dangerous delivery, but it did pitch well and go in a straight line!
As for my batting, it could be said that it was erratic as I thought it would be. I found it an impossibility to hit any of Lawrie's light-speed fast balls, but I did manage to make some contact with the rest of them.
My one weakness though, it would appear, is against spin-bowlers. I have this unfortunate habit of seeing a slow ball coming towards me, swinging my bat ferociously like Errol Flynn, missing the ball completely and knackering the tendons in my shoulder. All of this happens in a split second and is followed by the 'chink' of the ball hitting the stumps.
Anyway, it's all something to work on. The following nets session wasn't as bad. I defended my stumps admirably, but still managed to repeat my left-shoulder straining antics.

Jude said…
Just stumbled across your blog and found some of your posts amusing. Especially the women's conversation and the 'C'ricket with a capital - I have a habit of doing the same with Ballet, Literature, and Tennis.
3/19/2009 11:05 pm

Jude said…
It is a little bit weird watching sports players dance, but then some of them are pretty good and that's probably as a result of their sporting abilities. Some of them I think should just stick to their sport, e.g. Mark Foster and Andrew Castle - just terrible. I actually thought tennis players might be the best, obviously I was wrong. Still, I wait for the day Federer steps onto the stage, he looks like he'd be really good at ballroom, or ballet.
I actually have to confess to never having watched Ramprakash play cricket.
3/25/2009 11:19 pm

T.S. Ó Ceallaigh said…
Well if you've never seen him play Cricket then you'll not understand why he made such a good dancer!