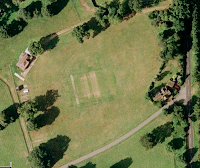 This Saturday I made my [substantially less than] first class cricketing debut. The setting was the beautiful village of Send, near Woking and the temperature was something around the 28°C mark. I was playing for the Cuddington Casuals 'A' team and kind of scored three (2 wides and a leg-bye) and lasted longer than I thought I would—about three overs.
Newdigate's 3rd XI, our opponents for the day, reported the match on their website as follows:

Newdigate 221-4 beat Cuddington Casuals 177 all out

Played at the picturesque Concorde CC ground near the village of Send, Newdigate 3rd XI travelled in hope of a third straight win. On winning the toss Cuddington sent the visitors in on a slow but true wicket and whilst picking up the early wicket of opener Chris Fox for 13, U16 Colt Matt Clarke joined Dev Patel (52) and built a superb innings of 72 before being bowled late on in the visitors allotted 40 overs. Newdigate had also welcomed back Simon Goddard (14) to their line-up who nonchalantly showed his class alongside Pete Trower (15 n.o) and both batsmen helped push Newdigate's total to a decent 221 at the tea interval.

Newdigate's strength is versatility in their bowling attack and the 8 Colts included in this team simply underlined that fact. There was no better an example than young U13 Alex Miller whose senior debut returned the well earned figures of 3-30. Alongside him were the ever reliable U16 opener Jose De Castro (8-1-31-1), Jud Morris and the Bowley brothers Will (1-25) and Jack (1-26) , whose leg spin at times bamboozled the home side. However the overall hero for Newdigate this time was the irrepressible Dev Patel whose 4-14 off 6 powerful overs simply ripped the heart out of Cuddington's middle order and ensured victory was again heading Newdigate's way. With 2 catches to boot, it was a superb all round performance.

Highlights in Cuddington's innings included Kiwi Craig's half-century off about 30 balls and the captain getting a duck! In the captain's defence, his bowling was amongst the most effective at getting wickets.
We still had 7 overs left when we were bowled out for 177... by which time I was already on my second can of Strongbow having been at number 3 in the batting order!
Win or lose, and we lost, great fun was had and the lads on their team, of which many were very young, were good sports and up for a laugh.