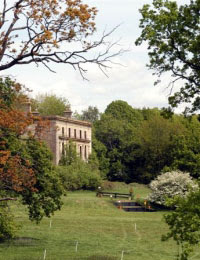 I was watching a programme, as I seem to spend a fair proportion of my time doing, and that programme happened to be Nicholas Crane's Great British Journeys. He was following the guidebook written in 1770 by the Reverend William Gilpin called Observations on the River Wye. This tourist guide is no stranger to me as elements of it formed large areas of focus in my Master's dissertation as William Wordsworth was one of the many who was believed to have followed the guide.

History lesson over. One of the most interesting parts of this programme, other than the fact that Crane was doing the journey in a canoe, was the when they came across an old mansion called Piercefield House. What struck me was how astoundingly wonderful this ruin of a mansion in the middle of the Wye Forest actually looked. Usually I would get on my high horse and start declaring that the government needed to start investing more into our architectural heritage, alas, this time, I didn't.

I found myself wondering why anyone would want to disturb this sleeping mansion and attempt to remove from its state of sullen slumber. I for one would not want to restore this but rather admire it in its current form eternally, surrounded only by grazing sheep and cattle. Then again, I am someone that loves rusty old trawlers in a harbour or a load of driftwood on the beach... if only I could afford to be a beachcomber.